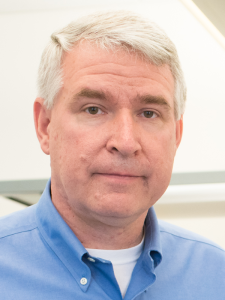 Tim serves as a Lecturer at Dartmouth College after completing a PhD in Computer Science in 2018. He previously spent more than 20 years working in strategy, technology, finance, and operations. He has led teams in a wide variety of organizations including: technology start-ups, hedge funds, management consulting, non-profits, and the military.

Tim’s PhD research focused on the privacy, security, and usability of wireless sensor networks. His work on a project called Wanda was featured in over 200 newspaper, radio and television stations, including the New York Times and the Washington Post.

Most recently before returning to school, Tim worked with a technology start-up where he developed and deployed 11,000 Internet of Things sensors in San Francisco to help the city manage traffic congestion and parking. Tim served on the firm’s Management Committee and was Chief Technology Officer.

Before the start-up, Tim was the Chief Technology Officer at Elliott Associates, one of the oldest and largest hedge funds in the world. There he led teams in New York, London, Hong Kong and Tokyo.

Prior to joining Elliott, Tim was a consultant at McKinsey & Company where he advised senior executives and helped craft the long-term strategic vision for companies in financial services, supply chain, energy, aviation, telecom, and retailing.

Before McKinsey & Company, Tim was Assistant Security Manager at the Metropolitan Museum of Art in New York where he managed projects and helped lead the Museum’s force of nearly 500 security guards that protect the multi-billion dollar art collection and ensure public safety.

Tim began his career in the US Air Force Special Operation Command where he conducted unconventional warfare operations around the world.

SPLICE mission: to develop new scientific insights and new engineering principles that enable people to live in a trustworthy Smart Home, one whose security they can understand and manage, and with strong mechanisms to protect their privacy.

Text and images on this site are copyrighted material, with copyright held by the page/post author unless otherwise noted. The SPLICE logo was designed by Emi Hayakawa, with copyright held by Dartmouth College. University logos are trademarks of their respective university. This research program is supported by a collaborative award from the National Science Foundation SaTC Frontiers program under award numbers 1955805 (Dartmouth), 1955172 (Hopkins), 1955228 (Illinois), and 1955231 (Morgan). The views and conclusions contained on this site are those of the authors and should not be interpreted as necessarily representing the official policies, either expressed or implied, of NSF. Any mention of specific companies or products does not imply any endorsement by the authors, by their employers, or by the NSF.